The first teaser trailer for 'Minions: The Rise of Gru' is here

The truth gets twisted in 'Dark Waters'

The way of the warrior flows through 'Mulan'

'The Call of the Wild' - Review

It’s an awesome time to be a Justice League fan…especially as we have just over two weeks to go until this EPIC film is released in cinemas.

A host of fantastic new teaser spots have been released and they promise a wealth of fantastic footage which shines a light on the formation of the Justice League, along with the journey that each of these heroes will have to undergo in order to become the icons that will save our world.

These new spots are just the first phase of a colossal marketing push from the studio, and fans have taken to countless social networks with the hashtag #AllIn to speculate on the film’s plot and action. The Justice League themselves have also been on the move and have kicked off their promo tour with a trip to Beijing.

The anticipation for Justice League is very high and fans will be able to experience it first hand when it is released on November 16. 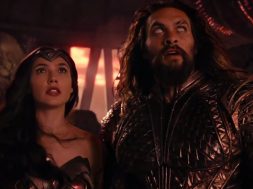 Get a taste of Danny Elfman’s ‘Justice League’ Score