21 Savage teases the terror that is to come in 'Spiral: From the Book of Saw'

Every one of us has a strong memory of Winnie the Pooh, but behind the beloved story was a thoroughly complex and heart wrenching story of a family that was lost then brought back together through love. Director Simon Curtis explores this in great detail with two of the best performers in the world in Goodbye Christopher Robin.

Traumatised and scarred following the end of the First World War, writer A.A.Milne (Domhnall Gleeson) retreats with his wife Daphne (Margot Robbie) and their young son Christopher Robin (Will Tilston) to the countryside. Here Milne slowly builds a relationship that leads to the creation of one of the world’s most beloved children’s books. But the media circus that erupts after it, and the strain that it places on his family could soon tear apart everything he has come to create.

Goodbye Christopher Robin is lead by some incredible performances and they start with Domhnall Gleeson as the famed author himself. While it is undeniable that Gleeson’s Milne has an incredible imagination, Gleeson instead focuses his performance on the sense of loss and the intense repercussions that he suffered following the end of the First World War. This is a man who has been left traumatised and shell-shocked by the horrors of The Somme and who cannot find a way to move on. His salvation comes in the form of his young son, Christopher Robin, whom he calls Billy Moon, and who he slowly forms a relationship with. Inspired by his son he soon creates the Winnie the Pooh stories, but in the fanfare that follows he ultimately has to decide what is right for his son over his own ambitions.

Gleeson’s performance is in keeping with the film’s time period, and he carries the stiff upper lip of British High Society well. This combined with his ease at expressing the trauma that Milne suffered make for a complex and interesting character. Gleeson also acts well with the film’s scene stealer Will Tilston who portrays his young son Christopher Robin. While the memories of the war at first make their relationship awkward, eventually this intrepid father and son grow to be extremely close and their journies into the woods together are some of the film’s most heartwarming moments.

Standing next to Gleeson is Hollywood stunner Margot Robbie and here she steps into another great performance. As A.A. Milne’s wife Daphne de Sélincourt, Robbie is a real piece of work. Best described as a ‘good time Charlotte’, Daphne is a completely challenging character and someone who is more interested with keeping up with appearances and maintaining her champagne lifestyle than with the well-being of her child or husband. Part of this stems from her resentment toward Christopher, as she originally wanted a girl, and her unwillingness to deal with any type of challenge or issue ultimately makes things far worse than they actually are. While she might be a rather horrible character, Robbie’s performance is flawless and again shows off the considerable range that this young actress can handle.

I have to commended director Simon Curtis and his team for flawlessly capturing the unique setting and time period of Goodbye Christopher Robin as well. The film’s time period of the early 1920s is of crucial importance to the film’s narrative and the attitudes of the day drive much of the narrative forward. Much of this relates to the realm of British Upper Society that Milne and Daphne travel in, and of the considerable press attention that is thrown at young Christopher after the Winnie the Pooh books become a hit. The film’s costuming and art direction are also greatly realised in their conception and I was particularly impressed with the worlds that Curtis inspired, from the Art-Deco infused London townhouse of the Milne’s to their quiet and quaint English cottage that they later settle in.

While there’s plenty of heart-warming moments in Goodbye Christopher Robin it is a film that is also not without plenty of tears. Much of this comes from intense pressure that young Christopher comes under as he becomes a media sensation following the publication of the books, which his parents, especially his mother, are all too pleased to use towards their own financial gain. However, the film’s most tearful moment comes at the separation of Christopher from his beloved nanny Olive (Kelly McDonald) who is essentially his surrogate mother, and who has more to do with raising him than that of his own mother Daphne. But fear not for all things are put right, and audiences will truly walk away with a smile on their face after witnessing this film.

Goodbye Christopher Robin is a simple yet compelling little tale and offers a rarely seen side of one of literatures most beloved creations. While a good supply of tissues is a necessity for this one, as the tears do flow, Goodbye Christopher Robin will ultimately warm your heart at the reconciliation, love and wonder that a little boy provided for his father. 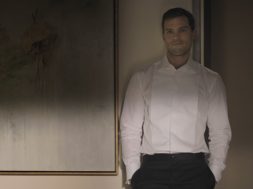 Jamie Dornan could be joining the Robin Hood origins movie