The rush of ‘Terminator: Dark Fate’ is here

The rush of ‘Terminator: Dark Fate’ is here 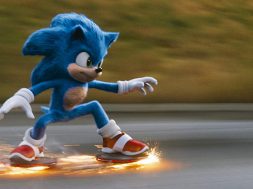 'Escape from New York' eyes up Wyatt Russell to star

'A Beautiful Day in the Neighborhood' - Review

If you’re seeking an action rush then you need not look further than Terminator: Dark Fate, the new film from director Tim Miller and producer James Cameron, and which promises to give us the official sequel to both The Terminator and Terminator 2: Judgment Day and it’s promising one intense rush!

A new trailer has just been released and it’s packed out with action. Check it out below:

27 years after the events of Terminator 2: Judgment Day, a new, modified liquid metal Terminator (Gabriel Luna) is sent from the future by Skynet in order to terminate Dani Ramos (Natalia Reyes), a hybrid cyborg human (Mackenzie Davis), and her friends. Sarah Connor comes to their aid, as well as the original Terminator, for a fight for the future.

The action really gets amped up here in Terminator: Dark Fate and Tim Miller is once again bringing his smash mouth, hit-em-hard style of directing, that he first leveled on audiences with Deadpool, once again. Taking audiences to the present, Miller charts a brand new landscape for the Terminator franchise as the war with Skynet is clearly not over and once again a battle must be waged.

When a newly advanced Terminator dubbed Rev-9 (Diego Luna) is sent back through time to kill the ordinary and innocent Dani Ramos (Natalia Reyes), future assassin/soldier Grace (Mackenzie Davis) is also sent back to our present to protect her and from there the fight heats up quickly. Walking straight into the brawl is Sarah Conner (Linda Hamilton) who is once again seeing history repeat itself and the stakes couldn’t be higher this time.

And of course stepping back into the film is the one and only Arnold Schwarzenegger as the T-800 and you knew this legend was bound to be back! The animosity between Sarah and the Terminator has still not subsided and this only adds to the drama of the film, along with Arnie’s handle on a series of very big guns that he gets to use for max damage.

If you’re seeking an adrenaline rush then Terminator: Dark Fate is bound to give it to you and you’re going to be in for a seriously fun time here with it arrives back in cinemas on October 31.