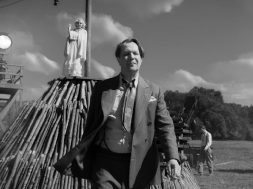 When it comes to authors who have shaped the very structure of narrative they don’t get more revered than Charles Dickens. A literal genius in every sense of the word, Dickens’ narratives and characters have enchanted the world ever since 1836’s serial publication of The Pickwick Papers. Regarded as a documentarian of his own time who captured the struggles and hardships of the Industrial Revolution and whose stories now feel even more timely in the age in which we live.

Now one of Dickens’ greatest ever works, A Christmas Carol, has been reinterpreted for a brand new generation and this new series from multi-talented creator Steven Knight (Peaky Blinders, Taboo) who takes audiences into the dark and harrowing journey of redemption that Ebenezer Scrooge must go on to save his mortal soul.

Ebenezer Scrooge, a cold and bitter man, despises his fellow human beings, the Christmas holiday and what it represents. On Christmas Eve night, he is visited by the ghost of his dead partner Jacob Marley, who warns him that for both of them to be redeemed Scrooge will be visited by three spirits. Throughout that night, Scrooge will be confronted by visions from his past, present and future in the hope that these experiences will help him to re-connect with humanity, especially his own.

For those who have expectations of a magical and enchanting tale, well, this version of A Christmas Carol is most definitely not that. It’s a harrowing and sometimes frightful journey of a man who must experience his own dark side of the soul to find his redemption and discover the true meaning of Christmas and the joy that it can give its audiences. Knight steeps the series in the industrial, class system of its era when inequality and poverty were rife and where the riches of the few where at an expense of the many. While he does keep the tale bound to the Industrial Revolution it does begin to feel that this version of A Christmas Carol is extremely contemporary in its themes and style, and it’s narrative pulls you deeper into the journey that Scrooge must undertake.

Cast in the lead role of the classic Ebenezer Scrooge is Guy Pearce and this award-winning actor once again disappears into the character and gives a commanding performance. While he’s a younger Scrooge than we’ve come to expect, he’s most certainly lost none of his misers’ touch and Pearce’s Scrooge is a bitter and nasty piece of work who has no qualms about doing whatever is necessary to achieve a profit. He’s a pilfering and incredibly mean spirit and his make-up gives him the appearance of a walking skeleton who is consumed by monetary gluttony, and a desire to consume every piece of currency he can…all while never giving any of it up in the process. His journey to redemption is a hard one and when he finally does see the light it is a radical transformation on the part of Scrooge and it’s all the more powerful because of Pearce’s performance.

This rendition of A Christmas Carol is not for the faint of heart and it certainly makes for the bleakest of adaptations that I’ve seen so far, but the darkness that these characters must go through really capture the spirit of its age and is in keeping with its journey of redemption. Concerning its production, Knight’s A Christmas Carol is captured with amazing creativity that is applied to its production design and visuals and you certainly get swept up in the sights that are presented to you here.

While Knight’s adaptation of A Christmas Carol is not strictly a literal adaptation on its own, but rather as a creator Knight instead puts his own rift on the material in some places, giving it greater scope and allowing far more access to a larger audience. It’s quintessential Christmas message is still here, but audiences may need to dig a little deeper to find it, but never the less the path to redemption is a massive part of A Christmas Carol and Knight handles it in a way that will remain satisfying for audiences here.

A Christmas Carol is an incredibly interesting and unique presentation of a classic tale that has become a stalwart part of Western popular culture and it’s presentation here will surely enthral the senses of its audience.

A Christmas Carol is currently available to watch on SoHo and stream on Neon.