Play time's over in the brand new trailer for 'Shazam! Fury of the Gods'

The horror revs up in 'Scream VI'

Brace yourself for the rush of ‘Dungeons & Dragons: Honour Among Thieves’

It’s taken some time, but after a very long wait, we finally have the arrival of a confirmed release date for Black Widow, and a new trailer that explores the legacy, meaning and significance of Scarlett Johansson’s Natasha Romanoff. And this is promising to be an action-packed ride.

Watch the brand new trailer for Black Widow below:

Check out my full trailer reaction for Black Widow below:

Following the events of Captain America: Civil War, Natasha Romanoff finds herself alone and forced to confront her past.

While earlier trailers for Black Widow have focused on the action of the upcoming film, this new trailer dives deep into the family of Natasha Romanoff, which includes her adoptive sister and fellow Black Widow operative Yelena Belova/Black Widow (Florence Pugh), her mother figure Melina Vostokoff/Black Widow (Rachel Weisz) and Alexei Shostakov/Red Guardian (David Harbour), a Russian super-soldier counterpart to Captain America, who acts as a father figure to the characters of Natasha and Yelena.

We get to see a good dose of backstory in this new trailer, and director Cate Shortland is focusing on the family dynamics of this story and just how much meaning and significance this has for the character of Natasha.

In addition to this, Shortland is also promising a dialled-up action spy-thriller that long-time MCU fans will be very happy about. The spy-action here is in keeping with the tradition of real-world espionage thrills of The Bourne Identity and the newly released The Falcon and the Winter Soldier series on Disney+, and audiences who are seeking a considerable rush will be well up for plenty of fun here.

This new trailer is also of considerable importance as it gives us a greater look into the film’s lead villain Taskmaster. A brutally efficient assassin who has the ability to replicate the combat skills of any person he comes into contact with, and it appears that he’s being used as a pawn by Ray Winstone’s Dreykov, the head of the Red Room, who has a personal vendetta against Romanoff.

Also added unto the mix is Academy Award winner William Hurt who returns in the role of Thaddeus “Thunderbolt” Ross, a former four-star Army general who is now serving as the United States Secretary of State, and we’re certain that he’ll make things very interesting for Natasha and her family in Black Widow.

While the COVID-19 pandemic was hard for Marvel fans and meant that we had to wait to return to the big screen for Black Widow this trailer proves that the wait was worth it, and more importantly that this film was not a victim of the pandemic, and audiences the world over will be able to see it in all it’s glory both IN CINEMAS and on Disney+ when it is released on July 8.

0
0   0
previous Everything is about to get crazy in 'The Suicide Squad'
next LeBron James is ready to jam out on the court in 'Space Jam: A New Legacy' 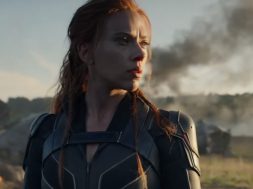 The all-new teaser trailer for ‘Black Widow’ is here