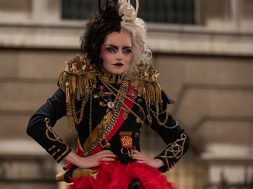 All hell is about to break loose in 'Mayans MC'

Get behind the action of 'Black Widow'

The brand new trailer for 'Free Guy' is here

The big screen is back darling and there’s no better time than to make a trip to the cinema to witness the dazzling delights of Walt Disney Pictures’ all-new villainous origin tale in Cruella and trust us when we guarantee that this one is fashionably fabulous in every way possible.

Set in the 1970s in London during the punk rock movement, the film follows Estella de Vil (Emma Stone), an aspiring fashion designer, and explores the path that will lead her to become a notorious criminal known as Cruella de Vil.

It’s time to go back in time darlings. Back to the punk rock era of the fashionable early 1970s and it’s here that director Craig Gillespie takes us into the formative years of a talented young designer who is destined to become the ultimate Disney villain. And the results are diabolically good in Cruella. Gillespie has made a career of telling compelling and unique stories of misfit characters and the narrative of Cruella makes for plenty of big-screen cinematic fun in his hands. Gillespie understands the motives and aspirations of Cruella perfectly, and he’s all about telling a story of a bad girl who has no desire to be good, and who’ll do whatever it takes to reach the top.

In telling this darkly delicious narrative, Gillespie enlists the talents of Academy Award winner Emma Stone, who is a sheer goddess of the performing arts and who always charms with every role she takes on. With Cruella, Stone gets to sink her teeth into a very meaty character and there’s great layering and revelation in her performance as she brings this grand dame of Disney villainy to life. Stone does something interesting in the duel role of Estella/Cruella de Vil and brings to life a definite Jackyll and Hyde character, and the dual psychology at play in her performance certainly keeps audiences on edge.

As a talented designer, Estella is definitely prone to mischief, and her skills lend a considerable edge to her early exploits as a conwoman. But it’s when she embraces her dark shadow as Cruella where things really get interesting. As Cruella, Stone makes for a dangerous and darkly cunning criminal force who is willing to climb to the top of the fashion world by any means necessary. Stone has a blast in the role and you can tell that she was enjoying the process of completely slipping into such a dangerous and alluring character, and most definitely proves that bad girls have much more fun.

Facing off against Stone’s Cruella is two-time Academy Award winner Emma Thompson as Baroness von Hellman, a fashion icon and Cruella’s mortal enemy…and these two women don’t like each other one bit. As the Baroness, Thompson makes for a chilling Ice Queen who could cause even Miranda Priestly to cry and she really plays into a high level of psychopathy that gives Cruella a challenge and marks her out as a serious threat. Like Stone, Thompson revels in her chance to be villainous and she brings out plenty of surprises in the role that audiences certainly won’t expect.

Along with the Emma’s, praise also needs to be lavished on the supporting duo of Joel Fry and Paul Walter Hauser as Jasper and Horace, Estella’s best friends growing up and a pair of enterprising conmen who are always seeking a new score. Both Fry and Hauser make for superb supporting players in this villainous tale and no villain can get ahead without a little help…which these two are too willing to provide. This misfit family is made complete by animal companions Buddy and Wink, who play an important part in this gang’s grifts and these cuddly companions steal every scene in which they appear…especially the cute, but feisty Wink.

In terms of the cinematic experience, Cruella is a decadent feast for the eyes and Gillespie alongside costume designers Jenny Beavan and Tom Davies, and hair and make-up artist Guy Common, have completely gone to town with this one and the result is haute couture at its most stunning! Artistically lavish and incredibly bold, the costumes and looks that Cruella and the Baroness engage in are utterly glamourous in their presentation and serve an important role in taking audiences further inside the film’s narrative and Cruella’s rise to power. These bold haute couture pieces also serve to expand the transformation that Estella takes in her journey to becoming Cruella and the results will have audiences transfixed on the action that unfolds on screen.

Assisting the lavish visuals that are on display is one of the coolest cinematic soundtracks to be released in a very long time. Taking a trip back in time, Gillespie pulls together a range of amazing tracks from the likes of The Doors, Nancy Sintra, Electric Light Orchestra, Blondie, The Clash, Supertramp and The Stooges and this soundtrack supercharges this film with that anarchistic edge of the late 1970s. Added to this are Florence and the Machine’s title track, “Call Me Cruella”, and it makes for a perfect companion track for the complete and full appearance of one very diabolical villainess.

It must also be said that Gillespie and his team do a fabulous job of weaving in the past history of 101 Dalmations into Cruella and there are great callbacks to Dodie Smith’s original work, alongside the original 1961 animated classic and the 1996 live-action films that were a major part of my childhood. I was very impressed with how all of this material, alongside this new original narrative, came to create the Cruella that we all know and love and audiences will be in for some very neat surprises.

It’s been some time since we last had the pleasure of the spectacle of a Disney film up on the big screen and the arrival of Cruella is definitely to be celebrated. From its lavish visuals to the intense narrative, gripping performances and rocking soundtrack, Cruella has it all and is a guaranteed good night out for all those who are looking for plenty of diabolically good fun.

Haute couture gets sinister in ‘Cruella’ 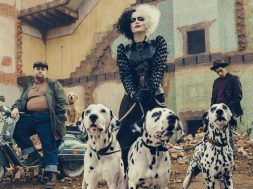 Emma Stone finds her evil couture side in ‘Cruella’